Start a Wiki
Bounty Hunters are a group who work for SOL Technologies in order to capture Ignises. They appear in Yu-Gi-Oh! VRAINS anime.

The bounty hunters wear dark green shirt, with protecting blue and green gears, blue belt, dark green pants and dark green boots and green with black. He also got the logo of SOL Technologies, being bounty hunter, except for Blood Shepherd who got different avatar. 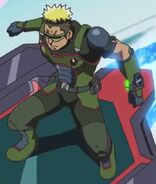 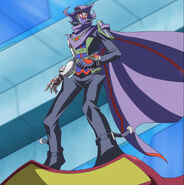 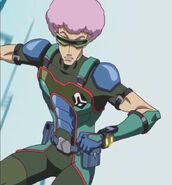 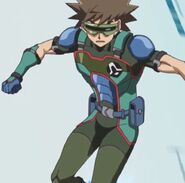 Yoroizaka
Add a photo to this gallery

Akira was unwillingly forced to find bounty hunters to track Playmaker down. He took in his office three people, among which one of was Go, in a new outfit. Go didn't expect Akira to be his boss, and neither did the latter to think Go would become a bounty hunter. Go simply stated his reasons were his own, and did not want to explain himself. Instead, he noted there was another bounty hunter. Hayami explained he was late, which upset Go a bit. Akira assured him that dangerous, person was merciless, yet was professional in his activities. Before Go left, Akira asked him why did he join the bounty hunters squad, and turning away from his fame as a Charisma Duelist. Gore replied the job was more fitting for him to defeat Playmaker and reclaim his pride. Akira understood, and told Playmaker about the secret of his power, for he a victim of the Lost Incident. He informed Playmaker's purpose behind dueling was to live, and the secret was determination and persistence. Go was surprised to see the guy wrapped-up, as Blood Shepherd didn't want to show his face to those that did reveal in LINK VRAINS. Go ignored that, claiming he would be the one to defeat Playmaker, since the latter was always one step ahead of him. Blood Shepherd ignored Go, but reminded not to be ordered around, since he did his things at his own pace. Akira showed a footage of Bohman, the orange figure, since Blood Shepherd believed it would help them track Playmaker down. Go was alarmed at the figure, while Blood Shepherd noticed the figure did not log out yet. Regardless, Akira exclaimed the figure went beyond the restricted area of LINK VRAINS.

Go and his two allies Kenmochi and Yoroizaka went to pursue after Playmaker and Soulburner. Ai recognized Go, who was working for SOL Technologies. Go announced his pleasure that Playmaker returned to LINK VRAINS, and had his fellow bounty hunters surround him to prevent his escape. Go wanted to duel Playmaker, who didn't have the time for that. Instead, he wanted to evade the pursuit. Gore collided with Playmaker's D-Board, ordering not to let them get away. Even with SOL Technologies trap activated, Playmaker wanted to continue. He and Soulburner evaded the trap, which two of the bounty hunters were caught in. Per Soulburner's request, Playmaker let him face Go. Go refused to deal with Soulburner, claiming he had "no time to be playing with him". Soulburner showed his Ignis, Flame, which made Go realize Soulburner was one of the victims of the Lost Incident. Soulburner confirmed this, and still challenged his senior. Go brushed Soulburner off for being called a senior, but accepted his challenge, since his job was to obtain the Ignis. Soulburner cheered as Flame introduced himself, but Go bluntly replied he would show no mercy and would make Soulburner regret his decision.

Go and Soulburner start speed dueling. Soulburner was fascinated by Go Onizuka calling him 'senpai' and saying that he's the one of the heroes who saved Link VRAINS. Go used new deck that was different from his usual Gouki deck. But, Soulburner at the end managed to win against Go Onizuka. Go was defeated, but Soulburner offered him his hand to get up. Go refused and walked away. Soulburner pointed out Go was, to him, one of LINK VRAINS' heroes, but swore in order to regain his old self back, had to continue winning. Go stopped Soulburner, pointing out everyone could lose a Duel, but the important thing was whether dwell on the defeat or continue fighting. He claimed the true self was revealed once someone loses, and logged out, but Flame commented Go was just a sore loser to say that.

Akira informed Go and Blood Shepherd of the gate in the restricted area, through which Playmaker and Soulburner had gone to. Go questioned why Akira didn't inform them of this earlier, but was reminded they were only hired to capture Playmaker and his Ignis. Akira noted unless the gate was reopened, Playmaker had no reason to return to LINK VRAINS, while his team were investigating the chances of reopening the gate. Blood Shepherd asked about Soulburner, whom Akira had no information of, save for having an Ignis and being a Lost Incident victim. Akira simply asked of them to be ready to capture Playmaker. Blood Shepherd turned around, deciding to take the matter into his own hands, regardless of Akira's demands telling him that he isn't his pet. Blood Shepherd jumped and logged out, making Go question If it was wise to trust him. In the real world, Kengo started analyzing data, and set a trap in LINK VRAINS, in form of a gate. His efforts managed to trap Soulburner and Flame. Despite not the target he wished to capture which was Playmaker, Blood Shepherd was nevertheless pleased, since Soulburner had an Ignis, too. Bubbles appeared to show some of Soulburner's memories.

With the two bounty hunters coming, Ai reminded Playmaker they could always log out, but Playmaker didn't wish to abandon Soulburner. Ai grumbled, but decided to help out by releasing a Data Storm, which trapped one of the bounty hunters and forced him to log out. The other bounty hunter, Kenmochi, initiated a speed duel against Playmaker, who noted that Kenmochi played a "Gouki" Deck. Kenmochi was defeated in one turn kill by Playmaker and logged out.

After Kenmochi lost the duel, Yoroizaka back in Link Vrains to face off with Playmaker in speed duel. Just like Kenmochi, Yoroizaka was also defeated in one turn kill by Playmaker and logged out once more time.

Per Akira's order, Yoroizaka, Kenmochi and Blood Shepherd were sent to Windy 's temple, to find the Ignis. The trio went after Lightning, who summoned dozens of Bit and Boot programs to fight them.
Retrieved from "https://yugioh-vrains.fandom.com/wiki/Bounty_Hunters?oldid=15367"
Community content is available under CC-BY-SA unless otherwise noted.