Yu-Gi-Oh! VRAINS Wiki
Register
Don't have an account?
Sign In
Advertisement
in: Characters, Male, Victims of Hanoi Project,
and 4 more

Jin Kusanagi[1] ( , Kusanagi Jin) known as Jin Kolter in the English dub is the younger brother of Shoichi Kusanagi in Yu-Gi-Oh! VRAINS.

Jin is a fair skinned teenage boy and he strongly resembles Shoichi. Like Shoichi he has grey eyes and purple hair, but his hair is long and unkempt, reaching past his shoulder and it is lighter shade than his brother. He is depicted wearing a dull-colored shirt with sleeves ending halfway down his elbows and pants.

As a child, he had short hair and wore a short-sleeved, light blue shirt and a pair of khaki shorts.

In Link VRAINS, Jin has short hair and wears a more ornate outfit. He wears a white sword-shaped mantle with a gold border and a purple tip and shoulder pads, which are tipped with gold pauldrons. The mantle has a prominent black high collar lined with golden and patterned with a lightning symbol. Under this mantle he wears a long white coat with a purple band at the hips below an orange belt, and with golden edges. He also wears black gauntlets with golden cuffs, white boots with black soles, and black "flared" pants. As with other members of Lightning's organization, he has Lightning's star symbol on his outfit; an orange version on his mantle over the chest and prominent golden ones embedded in his gauntlets and white boots.

A photo of Shoichi and Jin as children. 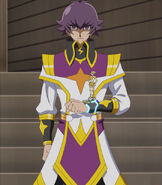 According to Yusaku, after being rescued from Hanoi Project, Jin developed intense PTSD and even now he is still suffering from PTSD. Since the events of the Lost Incident, he has become withdrawn, reserved and closed of his heart from the world. Jin seems to have a hard time talking, even to his older brother. Unlike Shoichi, Jin appears to be a very stoic and a distant person and is often seen with a dull emotionless expression.

As a child based on the picture of him and prior to getting kidnapped for Hanoi Project, he appeared to be cheerful and outgoing.

Since his brother uncovered the truth about Jin's abduction and revealed it to him, Jin has begun showing signs of recovering, talking more with his brother and doctors.

With no longer being burdened by the emotionally crippling events, reverting Jin back to his original, jovial self.

Jin, Yusaku, Spectre, Miyu Sugisaki, Windy's partner and Takeru were involved in the Lost incident 10 years ago.[2] Jin looked at the rescue people happily, but soon he saw them as skulls, which was caused by Lightning who made Jin suffers more. Despite of having been rescued, Jin is still suffering from the shock of the incident that caused him to closed off his heart from the world.[3][4] This event drove Yusaku to fight for him, and defeat the Knights of Hanoi so that Yusaku might save him from darkness.[5]

Six months later, after the kids were saved, Jin was shown up how he's sitting on one chair with blank eyes. His brother, Shoichi Kusanagi rushes to him asking is he's fine and where have he been, but after Shoichi saw in what condition is Jin, he was shocked and decided to find out more about his kidnappers, so Shoichi give up from his sports ambitions, learning about hackering in order to help his little brother, Jin.

Jin has been mentioned several times by Yusaku Fujiki and Shoichi Kusanagi, who are fighting Hanoi in order to save him.[6] After Shoichi discovered the true identity of Blue Angel who is Yusaku's classmate and step sister of SOL Technologies Security Manager Akira Zaizen, Shoichi suggest Yusaku to meet her so that he can get a lead on Akira reagarding his whereabouts and Yusaku's stolen memories but he doubted the plan would work due to Yusaku's poor social skills with women.[7] Jin was indirectly mentioned during Playmaker's duel against Revolver as the former vow to Revolver he would save him.[8] While Yusaku and Shoichi were deleting the files of Playmaker people post on the network Yusaku wondered if it was wise to seek Revolver out for answers about Yusaku's past and about Jin.[9]

Right after when Windy was saved from being killed by The Knights of Hanoi, Playmaker sees that Bohman and Haru shows up and demands them what happen to Jin's consciousness data, Lightning then reveal to Playmaker and Soulburner that Jin was with him this whole time,shocking them all.[12]

Playmaker tried to reason with Jin, but Lightning stated his efforts were fruitless .

Jin was in a deep trance and could not react to his words. Lightning had Jin, Haru and Bohman fly away, but Playmaker and Soulburner were chasing them down Lightning attempted to escape with Windy and Jin, but were chased down by Soulburner and Flame.

Lightning fled with Jin, and sensed that Bohman and Playmaker's Duel ended in a tie. Flame and Soulburner wanted to confront them, but since they were stalled by Bit and Boot clones, Jin and Lightning managed to escape.

what he thought of it. However, he laughed, reminding himself that Jin could not talk. They visit Windy, who was laying in one fountain and recover his body from the virus that he was infected by Revolver. Jin was supporting Lightning, while Lightning was talking with Windy. After that, Lightning left with Jin saying that he'll turn this place into graveyard.

Later, Lightning had Jin Duel Blood Shepherd, and told the latter would he lose, he'd become a mindless pawn like Jin. Jin, at Lightning's orders, continued to Duel. When the two took damage, Shoichi became sad that he could not protect his own brother. When Blood Shepherd was defeated, Lightning and Jin disappeared in a flash of light saying that he'll wait for Playmaker.

Lightning and Windy were resting on Jin, as they noticed their enemies approaching their world: Mirror LINK VRAINS. Lightning and Jin confronted Spectre and upon the latter's defeat, Jin absorbed him. Lightning noted that Frog and Pigeon could be further useful, and they, along with Jin, were teleported away.

Lightning and Windy were at the castle, where Lightning gave orders to Windy to Duel Soulburner. He and Jin watched their Duel, in which Windy was defeated.

The two also watched Blue Maiden Duel Bohman. After the battle, Jin and Lightning went to Bohman, since he had an idea.

Using Jin's voice, Lightning lured Shoichi Kusanagi into his lair, to force him to Duel Playma

ker, his ally. Thus, Bohman, Lightning and Jin watched the two sides fight on. Suspecting something wrong, Lightning, Jin and Bohman teleported to Kusanagi and Playmaker. The latter managed to defeat the former, but collapsed after the Duel. Lightning had Jin take Playmaker, and force him to duel while Playmaker was unconscious. However, Ai pointed out Playmaker was in no shape to duel, and Bohman managed to persuade Lightning not to fight him. As Bohman left, Jin and Lightning teleported away.

nd Jin came to Revolver, who started a Duel against Lightning, and were soon joined by Playmaker and Bohman, who watched the Duel. As Lightning used Jin as a hostage, Bohman stepped in and took his data, to prevent Lightning from cheating, and Jin reverted back as Lightning's servant. However, Lightning managed to keep a piece of data, which he used to keep 1 LP and prevent his own defeat. Bohman suspected this and went to Lightning, and absorbed him and Jin's data.

i told Yusaku that Jin is recovering, but he lost his memories of the Lost Incident, because Lightning used that data to keep his 1LP. Kusanagi pointed that Jin soon will come out from hospital.

Three months later, after Ai's defeat, Jin was working at the food truck with his brother, Shoichi. Jin made another order to Kusanagi, who was visited by Aoi Zaizen. She was pleased to see his brother was healthy again. Kusanagi was happy, too, as he could spend more time with his brother to make up for the time they had lost.

Community content is available under CC-BY-SA unless otherwise noted.
Advertisement