Start a Wiki
Miyu Sugisaki (杉咲美優) is a character appearing the second season of the Yu-Gi-Oh! VRAINS anime. Miyu is Aoi Zaizen's best friend from childhood and one of the Lost Incident victims and the human that Aqua was based on.

When she was a child, Miyu's hair reaches up to her nape with a side bang on each side of her pinkish-brown hair and blue eyes. Her attire consists of a pink shirt with a red ribbon similar to a sailor outfit blue shorts, white socks with orange trims and red snickers.

During the time she was captured, Miyu apparently sports twintails similar to Aoi.

As a teenager, Miyu got her hair longer and she currently wears hospital suit that is white with pink trims. 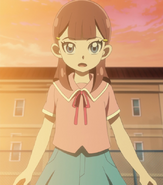 Full body of Miyu Sugisaki
Add a photo to this gallery

As a child, Miyu was very cheerful and outgoing, often accompanying and later, befriending Aoi despite the latter being ostracized by her other peers. Miyu was also adventurous, showing to Aoi the wedding ring of her mother. When Aoi took the fall for Miyu's incident of dropping the ring and losing it, Miyu felt guilty for it and was very thankful of Aoi's help despite being pulled away from her childhood friend.

When they were both children, Miyu approached Aoi who was ostracized by her peers, and soon befriended her. Miyu's befriending of Aoi had a major impact on her life, to the point where Aoi considered her a savior when she was down and sad. One particular day, Miyu took her mother's wedding ring without consent and showed it off proudly to Aoi. However, amidst the presentation, Miyu accidentally lost the ring in the drain. Shocked and scared of what happened, Miyu cried as her mother came and asked her on the whereabouts of the ring. Unwilling to see Miyu getting punished, Aoi took the fall and told Miyu's mother that she was the one who lost the ring. Miyu wanted to explain herself but her mother believed Aoi and promptly told her not to approach her daughter again. Miyu felt guilty over the event and would forever remember this as a case where Aoi saved her.

Miyu was abducted and placed into the Lost Incident Project were she would be forced to duel with 5 other victims of the Project in a virtual arena were if they did not win the duel, they would be electrocuted and starved. The data collected from Miyu was used to create the Water Ignis: Aqua. During the time she was captured, Miyu's reminiscence of Aoi kept her strong willed and determined to escape from the Project even during times where she lost her duels and would be electroshocked and starved, just so to meet up with Aoi one day to apologize for what she did in the past.

Aqua managed to track down Miyu. However, by the time she arrived, Miyu was attacked by Lightning who had infected her with a computer virus that placed her in a coma. Aqua tried her best to save Miyu but to no avail. During the process, Aqua managed to retrieve some of Miyu's past memories, especially those she had with Aoi. Currently, Miyu is in coma.

The end of Bohman and Mirror Link Vrains Edit

Miyu was shown up how she's awake at the hospital and looking through the window. Later, Aoi mentioned to Yusaku that she visited Miyu at the hospital. Aoi got Miyu a bouquet of flowers, and Miyu thanked her, for saving her. The two girls hugged each other to finally have seen one another.
Retrieved from "https://yugioh-vrains.fandom.com/wiki/Miyu_Sugisaki?oldid=20650"
Community content is available under CC-BY-SA unless otherwise noted.