Start a Wiki
Roboppi (ロボッピ, Roboppī) is a robot appearing in the Yu-Gi-Oh! VRAINS anime. She works as a maid at Yusaku's house. In Season 3, Roboppi serves as a secondary antagonist, and appears in a human form as a little boy who helps Ai.

Roboppi is a small, toy sized robot. Her body is mostly pale cyan with teal wheels and pink spheres. She has a white neck and stomach with mitten shaped, pink hands that can extend from her body. Her face is a black screen that projects pale yellow slits that represent her eyes, and she can change them based on her different emotions. She has two horn-like attachments around her head with pink rings and orange tips.

In season 3, thanks to Ai, Roboppi gains a human form in the virtual world, appearing as a small boy with a short bobcut of cyan hair, two pink streaks and orange in the back. His eyes are pale yellow and he has pale skin. A whited framed, yellow diamond is present in the middle of his neck. Roboppi's attire consists of a large, blue jacket with a black and white hood, pink and white stripes down the front over a black collar, a white zipper, and pink and orange rimmed sleeves. He wears turquoise jeans and pink sneakers.

When he was overtaken by Ai's program boost, the iris of Roboppi's eyes are surrounded by red rings and the black outlines of his eyes becomes more pronounced. He also gains a menacing, maniacal glare. 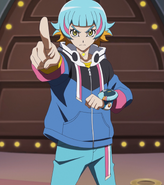 "Smart" Roboppi
Add a photo to this gallery

Roboppi started out as Yusaku's maid, without much personality. As the series progressed, she began to develop a more quirky side. She gets excited when seeing new things, like going outside, and often cheers on her friends.

In Season 3, he’s now Ai’s evil minion. Ai's backup caused Roboppi to develop a free will of his own, which was an unexpected biproduct. Roboppi's quirky nature remains intact, along with his curiosity of the human world. He's generally seen to be quite cheerful and happy. He is no longer restricted by his initial, basic programming of being forbidden from using certain words, stating that humans are idiots when it comes to gambling. He also thinks that humans are the worst creatures in the world and therefore the enemy, coming to this conclusion with Ai's teachings after becoming smarter. Thus, he develops a condescending nature towards humanity, wishing to "clean" the world by purging it of humans and gaining "experience points".

Roboppi possessed normal robotic features. He was able to project screens on the wall, such as chat rooms and even duels, though the latter was a new feature. He appears to have some understanding of mechanics as he helped Ai turn Yusaku's Duel Disk into a drone.

After gaining free will and a SOLtis android body, Roboppi's skills have increased. He is able to take over other SOLtis drones, and hack into computer systems without detection. He was even able to easily manipulate a slot machine without touching it.

Roboppi was first seen cleaning Yusaku's bedroom. Ai called her an idiot; Roboppi replied that "idiot" was a forbidden word. Ignis asked Roboppi if she wanted to be smarter. He promised to fix her into a better AI if she became her follower and freed him to which she agreed.[1] Roboppi and Ai panicked when Yusaku returned home and had roboppy put him back on the shelf.[2] After returning to Yusaku's house Ai flexed his muscles to impress Roboppi. Roboppi clapped, while Ai thought how cool he looked to "dumb" robots. Roboppi exclaimed that was the forbidden word, but Ai promised when he was complete, he'll "start to do that", and swore to make Roboppi smarter, and both started blushing.[3]

After being left home again, Ai promised to tell a story to Roboppi, who wanted to listen more, since she did help Ai out in "secret things". Both started blushing and giggling. Ai told the story of the recent events: the confrontation with Ghost Girl, entering the SOL Technologies' data bank, battling the AI prototypes andfacing the former security-in-chief, Akira Zaizen, himself. Ai credited himself for some of Playmaker's contributions, amazing Roboppy, until he claimed he wished everyone to fight, with him as the bet. He also thought Playmaker as some sort of a fiend, though Roboppi stated he was just cold-hearted. After he told the story, Ai admitted he was uncertain what would they do next, since nobody else but Dr. Kogami knew about the incident.[4] After Baira was defeated, Ai and Roboppi completed the modifications to Yusaku's Duel Disk to turn into a drone. They both laughed in excitement, before Ai told her not to laugh harder than him.

Three months after the Tower of Hanoi, Roboppi was gadabout Ai, wondering where he was and when he'd be back. When he finally came home, Roboppi. Ai said he would, as she was his precious minion. Roboppi then questioned Linkuriboh, whom Ai was petting affectionately. When he also introduced him as his minion, this sparked a rivalry between the two.

Roboppi went to check on Ai, but noticed he wasn't in the Duel Disk. She alerted Yusaku of this, who just entered the room. He wondered if the Duel Disk was broken, but she told him the Duel Disk was fine. Seeing Ai was gone, Yusaku brought Ai to Shoichi to find answers. This was Roboppi's first time leaving the house. After being introduced to him, Takeru, and Flame, Shoichi checked Roboppi's data log and found she and Ai were on a website before the latter disappeared. Realizing there was an Ignis algorithm hidden on the site, Yusaku left to check it out.

Before heading out after Lightning, Ai spoke with Roboppi about the mission, feeling something bad might happen. Roboppi encouraged Ai on, but he berated her on her joking. He explained he was going to fulfill his promise to make her smarter, though not right away. Roboppi did a short dance as physical comedy before Ai yelled at her again. Telling Roboppi to live up to his expectations, Ai gave her a program, causing her eyes to glow red.

Roboppi watched Playmaker and Bohman's final duel by projecting it on screen. She wondered if she always had this ability, calling herself dumb for not remembering, then corrected herself that "dumb is a forbidden word." Roboppi went on cheering Playmaker and Ai. She starts to cry when Ai sacrifices himself to destroy the Neuron Link, saying her "bro" was gone and wondered if her "bro" had actually died. However, her system soon began to go haywire and she found herself in front of a large door decorated with sweets. Roboppi became excited, saying she hadn't seen anything this fun before and opened the door, releasing a wave of Ai's backup data.

After releasing the backup, Roboppi's body stopped working. Some time later, Roboppi and Ai, now as humans, went to Cyberse World to honor the fallen Ignis.

Roboppi is using an Appliance deck

Retrieved from "https://yugioh-vrains.fandom.com/wiki/Roboppi?oldid=20571"
Community content is available under CC-BY-SA unless otherwise noted.